On November 9th, Berlin celebrated the 25th anniversary of the fall of the Berlin wall. 7000 ballons were lit along a 15 km long segment of the former course of the wall that once separated the city. Truly a symbolic frontier of lights – LICHTERGRENZE – . At the Brandenburg Gate, Conductor Daniel Barenboim directed the Berliner Staatskapelle playing Beethoven’s Ode to Joy, renaming it for the event: FREIHEIT SCHÖNER GÖTTERFUNKEN – ODE TO FREEDOM.

And then the illuminated balloons were released, one after the other, their shell shimmering for some moments and then disappearing into the night, like the wall disappeared out of view. A truly magic moment. Listen to The Winds of Change to catch the spirit. 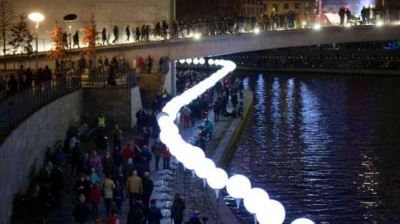 An estimated one million people wandered slowly through the streets, smiling, happy and elated with the spirit of freedom and unity.

A week before this event, friends invited us for a trip to Kremmen (near Berlin) where thousands of Grey Cranes stop to feed and rest for a few days on their long flight South. A truly amazing event it was, seeing these flocks of cranes flying above, honking as if to have a conversation or keep in close contact during their long trip, constantly changing individual positions in the long stretched-out lines but essentially maintaining their famous energy-saving V-formation, oldest birds leading.

The sky was cloudy, a blessing in disguise because it allowed us to witness an amazingly beautiful sunset, trees silhouetted against the sky of many colors, cranes crossing our path on the ground and flying above in smaller and larger groups – PURE MAGIC!

Knitting took a back seat for the past couple of weeks but a few projects saw the light of the day. I want to make an unsual textile piece to showcase the gift from a very generous and always inspiring Ravelry friend, Faith Welsh of FIBER FUSION Taos. She (Faith Welsh) and her friend Monte McBride are blessed with a true feeling for fibers as you can easily see when visiting their sites. I was the lucky winner of two skeins of gorgeous silk yarn, so beautiful I have it sit in front of me during work to feast my eyes whenever I want to. Hard to find a project displaying the yarn in its full beauty – maybe a scribble shawlette, lacy and light, combined with kid silk haze? A heart-warming idea …